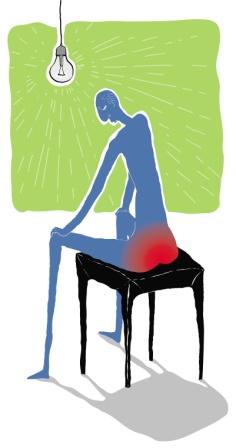 We’ve all been there… when nature calls and you want to answer, desperately … yet our bodies don’t want to respond! Or when it does, your stools are small, hard, dry and painful or difficult to eliminate!

One main reason is lack of fibre or water in your diet and another is not going when we should, especially in the mornings when we’re running late! This can lead to build up of toxins which can cause a number of health related problems.

Constipation may also be caused by lack of exercise and the frequent use of laxatives or by conditions such as diabetes, depression and Irritable Bowel Syndrome (IBS). Certain prescription drugs or OTC (over the counter) may be to blame too.

It’s easy to reach for a laxative at first instinct, but going for a herbal tea blend is the most natural way as it can be counted towards your daily water intake.

Known as the “little plant that roars”, the leaves are especially used as they have a mild laxative effect which may help in bowel movements to become more regular. Can be used to promote increased appetite and activate the digestive system. It can help weight control due to its diuretic (increased urine excretion) and laxative properties to remove water and food weight before digestion begins and help your body reduce the feeling of feeling bloated.

Known as the “regulator”, it is a most common remedy for digestive orders but can be used to relieve constipation. It contains oils that soothes spasms in the gut, can stimulate the secretion of digestive enzymes which calms the digestive tract. Can also relieve nausea and help control flatulence…that’s why some Indian restaurants serve this in dishes for customers!

Known as the “digestive regulator”, it is what the name suggests. It is packed with enzymes for healthy digestion and can counter acidity which eases gastrointestinal problems, acid reflux, indigestion and constipation. The various enzymes are also beneficial for the heart and lymph system (which is important to the immune system) and fights infections.

Known as the “treasure beyond measure”, this is considered the most valuable remedies in herbal medicine. It is one of the best restorative remedies for inflamed or irritated mucous membranes throughout your body. Conditions  such as respiratory problems, lung weakness and lower bowel inflammatory disorders may benefit from this. Frequent use can aid with digestion and produce regular bowel movements.

Known as the “juices from the lilies”, it is well known for its digestive aid properties as it relaxes the bowels and stimulates the large intestine and is used particularly in severe cases of constipation. It is also an excellent remedy for the skin as has been used to treat age spots, acne, heat rashes and wrinkles to name a few.

Known as “the soother”, it is well known for its soothing effect on the lining of the gastrointestinal tract and the stimulation in digestion thus aiding in digestive problems, including ulcers, liver disorders and inflammatory conditions. It also has a mild laxative effect, making it a gentle remedy for occasional constipation.

Known as the “potent laxative” or the “mother of all laxatives”, it is used primarily as the name suggests as a powerful laxative as it works on the lower bowel to increase movements in the colon. The nauseating taste has been prone to cause sickness and griping pains and shouldn’t be used if you have haemmorroids, abdominal pains or an inflammatory condition of the intestine.

Known as the “bitter tonic bark” as well as a “stimulant laxative”, it works by drawing water into the large intestine and stimulating intestinal muscle contractions making it extremely beneficial for those suffering from chronic constipation. Good for the pancreas, liver, gallbladder, spleen and stomach and can prevent intestinal diseases that occur from stagnant wastes.

This website is for educational and informational purposes only. The publisher/owner of blendingherbaltea.com is not legally liable for your use of the information which is not intended to diagnose, treat, cure or prevent any disease. If you have any serious health concerns, you should always check with your health care practitioner or medical herbalist before self-administering herbs.